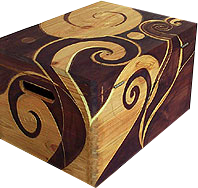 Why was a wooden time capsule built into the stairs of a Chris Carey home?

Read about the magic buried in this Chris Carey home.

“We bought our home on a handshake!”

My husband and I have lived all over the U.S., with our move to Louisville being our 15th. Consequently we have become well acquainted with builders over the years. When we met Chris in 2002, he and my husband immediately clicked and a feeling of trust was established. My husband said to me, “I like this builder. He’ll work with us.” How right he was! We decided to buy our house on a handshake, the old fashioned way. Despite no initial contract we could not have been more pleased with the outcome of our purchase.

“We liked its contemporary flair and the quality of the construction!”

“While driving through a Louisville neighborhood, we saw a home that Chris was building. We stopped to talk with him and the next thing we knew, we were walking through the house. Because we liked its contemporary flair and the quality of the construction, we decided that we wanted Chris to build our next home. “Chris went above and beyond in finding us a lot that met our needs. He worked with the developer to help us buy the lot we wanted at a price we could afford. Chris was always available during the construction phase to answer our questions. We still have a good relationship with him and know that we can call on him with any questions we might have.”

“We appreciated Chris’s professional attitude, his willingness to listen to our ideas, and his flexibility”

“We first saw a Chris Carey home during an open house and were immediately drawn to its open, contemporary style. As Chris worked with us to plan our home, we appreciated his professional attitude, his willingness to listen to our ideas, and his flexibility.

“Throughout the building process, Chris worked closely with us – from choosing the initial design to picking out paint colors. He offered suggestions that not only helped us find the colors and styles that we liked, but also saved us money. Whenever we had questions, Chris addressed our concerns.”

“ Because of his years of homebuilding experience, Chris was able to educate us about the wide variety of building materials available and help us make the best choices.”

“After interviewing a number of builders, we chose Chris to build our home because of the quality and attractiveness of the homes he had built. As we got to know Chris better, we were equally impressed with his enthusiasm and the pride that he showed in his work.

“Like many people involved with building their own home, we were anticipating that it would be a stressful experience. To our surprise and delight, working with Chris was fun and without the pressure that we had expected. He worked with us at every step, educating us about the building process and including us in any decisions that were made.

We liked the fact that Chris put his clients’ needs first. For example, one Sunday after moving in, we invited friends over for a barbeque and found that the gas line to the grill wasn’t working. We called Chris and he immediately came over to help us out. Our friends were amazed!”

“ We are happy with our new home and the relationship that we have built with Chris. We know that he will continue to be available to answer our questions for as long as we own our home.”

The magic hidden in this home…

"A comment by one of Chris Carey’s contractors gave us our first indication of the type of person Chris is. When we were looking at a home under construction by Chris, a workman volunteered that he was one of the fairest builders he’d ever worked for – that Chris treats everyone well. After hearing similar remarks by others who know Chris, we were convinced that we wanted him as our builder. That was six years ago, and we think even more of him now that our home is finished than we did when we chose him to build for us. That probably can’t be said about every builder!

Our house is Southern in style, with lots of crown molding and mantels. Although Chris usually builds contemporary homes, he seemed to enjoy the challenge of creating a home in another style. He produced the home design that we wanted and used the same high standards of workmanship that are evident in all his projects.

Chris is a man of his word. If he says he will do something, you can be confident that he will follow through. He continued to give us help and advice long after our home was completed.

One of the keys to Chris’ success is the relationship he builds with his contractors. Because he treats them well and values their talents, they do their best for him and the homeowner. Our home could have been a cookie-cutter, but because of the creativity and attention to detail shown by Chris and his workers, every room is unique and beautiful.

When our home was nearing completion, the workmen asked us if they could create a testimonial to our home. They accomplished this by building a box to hold a picture of our home, a description of how it was built, and pictures of our grandchildren. The box is buried, along with a note and a favorite tool from each craftsman, under the stairs to the cellar, where it will remain for future generations. One reason our home is fun to live in is because of our wonderful memories of the people who created it."

"One of the keys to Chris’ success is the relationship he builds with his contractors."

"..the workmen asked us if they could create a testimonial to our home."

The craftsman built a testimonial to memorialize their experiences working on this home.